(218) 732-0058 info@kinshipparkrapids.org
Home » The kids aren’t all right: Why mentees will be disproportionately affected by the pandemic 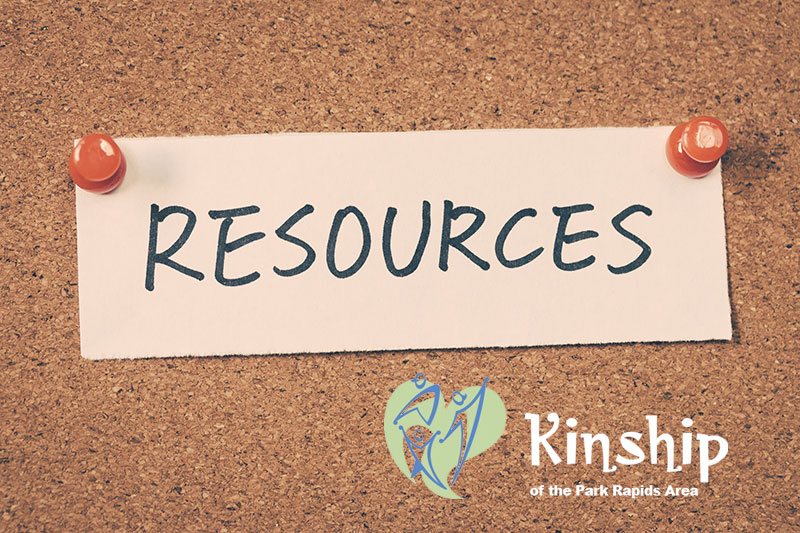 The kids aren’t all right: Why mentees will be disproportionately affected by the pandemic

Although COVID-19 appears to spare children from the most serious health problems, marginalized youth are likely to bear the heaviest burdens of trauma and economic fallout. This has serious implications for mentoring programs, which often serve particularly high risk youth. For example, an analysis of the two million young people aged six through eighteen, whom Big Brothers Big Sisters of America has served over the past decade, revealed that the majority were from low-income families (78%), and/or lived in single-parent homes (61%).[i] Similarly, a 2018 evaluation of 2,165 American youth participating in thirty nationally representative mentoring programs found that nearly 70% of mentees were from marginalized, non-majority racial backgrounds.[ii] The vast majority (85%) of the mentees’ parents reported that their children had recently been exposed to family stress (such as a family member struggling with substance use, frequent family arguments, or homelessness), while more than three quarters (76%) noted that their children faced economic adversity and safety concerns (such as housing insecurity, parental job instability, or gangs or drugs in the neighborhood), with participating families’ median annual income ranging from $20,000 to $30,000. Compared to young people on average nationally, mentees were roughly twice as likely to be living in extreme poverty, and in a single-parent household, and to have an incarcerated parent or family member. [iii] 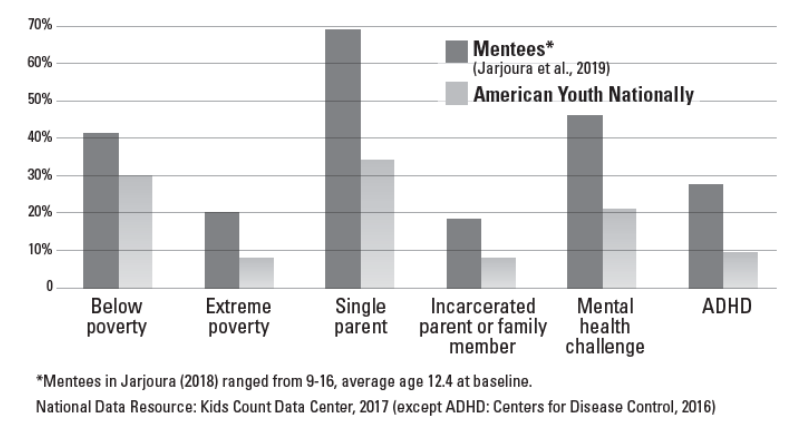 Youth often experience the stress and anxiety as much as parents, particularly those who are already vulnerable. In an excellent new article for the Atlantic, excerpted below, journalist Vann R. Newkirk II discusses the particular vulnerabilities of the kinds of youth that mentoring programs serve.

“For children who spend time in multiple households, rely on outside figures for guidance or mentoring, or are used to a stream of relatives in and out of home, prolonged social-distancing measures will mean profound separation from some people who provide care. All the FaceTime in the world can’t make up for fill-in help from aunts, uncles, grandmothers, and gym coaches. And for some kids, those supports are the main things interceding in a toxic—or even dangerous—home environment.

While most adults still have work and other routines to carry on, school is the primary source of structure and socialization for kids. Children have rich social lives, often experienced almost exclusively in school and extracurricular activities. And schools are the primary providers for lots of essential services. As New York City debated recently, schools are the only thing standing between some children and food insecurity. Beyond that, schools might be the only places some kids receive even cursory dental, physical, or mental-health care; rigorous physical activity; or clean water. A 2019 overview of formally established school-based health centers found they provided primary-care services for more than 6 million students across almost 11,000 schools. Low-income households are already struggling to grapple with the rising price of municipal water—and now a major source of free water for low-income kids will be gone in some places for a month or more.

The staggering economic fallout from the coronavirus pandemic will add a new dimension of suffering to the experience of young people. The numbers struggle to capture the reality of the situation. In the middle of mass freezes of whole sectors of industry, perhaps a fifth of all workers have lost their jobs or had significant cuts to hours in a span of days. If the pandemic does indeed spark a recession, then data from previous downturns indicate that food security, physical health, and general well-being for children will diminish, and quickly.

Rand Conger, a professor emeritus at UC Davis and a longtime researcher of the intergenerational consequences of poverty, told me the data from previous recessions are clear, and that we’re only beginning to see the effects. Conger studied the agricultural downturn in the 1980s, and followed patterns of disintegration of spousal and parental relationships, as well as spikes in child abuse. “It was so devastating for so many families,” Conger said, “and severe punishment tends to increase.” Child neglect and abuse tend to track with greater traumatic events, economic instability, and stress. Sadly, they might be tracking already. Reportedly, a single hospital in Fort Worth, Texas, has treated six children with severe physical-abuse-related injuries. Doctors believe the cases are related to parents’ stress over the pandemic.

All the evidence suggests that children—and poor children especially—will bear an incredible burden during the coronavirus pandemic and the attendant economic shocks. But that evidence has trouble breaking into a national conversation dominated by mortality rates and work-from-home strategies. Bruce Lesley, the president of First Focus on Children, told me this failure could be costly for kids. “It’s all the stuff that people just aren’t thinking about in terms of this crisis and how it feeds into existing problems and exacerbating them,” he said. “In enormous ways, I just think that people are missing all those sorts of things.”

It’s a morbid, anxiety-inducing exercise—trying to forecast all the ways things could go wrong—but it’s one Lesley thinks is necessary for working proactively to save children. In addition to supporting direct payments to families in this crisis, Lesley is advocating for an expansion of the Supplemental Nutrition Assistance Program (SNAP), funding increases to federal support for homeless and foster children, and a national moratorium on evictions. The one piece of good news is that there are plenty of lessons to learn from events like the Great Depression, the HIV crisis, and Hurricane Katrina that can help the country prepare to protect the youngest generation.

The coronavirus is a strange beast. By severing intergenerational relationships, it disrupts all the ancient ways families have always coped with disasters. It is singularly difficult to combat in the modern age of interconnected economies. And, through whatever quirk of biology, the virus appears to mostly spare children. All of those things might tempt Americans to think of it as something new, to be relieved by its selective mercies. But the most likely outcome is that this pandemic, like most others in history, will again uncover our most basic inequities. For children and their parents, that might mean that mortality rates are only the beginning of the story.”

For the original story from the Atlantic, please click here.

From The Chronicle of Evidence-based Mentoring/ April 2, 2020/in Editors Blog /by Jean Rhodes